Ashton has an M.S. in Marketing from Florida International University and has been working as a marketer for over five years. She is currently serving on the University of North Florida’s Department of Communications Professional Committee Board. Ashton has been a guest on several media and marketing panels throughout her career. She also holds a degree from the University of North Florida where she studied political science, journalism, and mass communications. Prior to working in marketing, she worked as a journalist for several news outlets and publications, including an internship at NPR where she produced several radio features. This site features a collection of her articles and radio features from her career in journalism. This site also features some of her insights and projects from her career in marketing. Ashton’s background in journalism has provided her with a solid foundation on which to build enhanced media and social media strategies to provide creative, innovative marketing solutions. Ashton also has first-hand experience with brand design and brand building. Ashton also works on an array of marketing projects from social media to email marketing and everything in between. View all posts by Ashton Elder

The January sun shines down as cars zip by Charles Turner who stands outside the Sulzbacher Center in downtown Jacksonville.

“I lived on the street for many years—more than I even care to remember. It is such a privilege and an honor to be in a program that’s really helping me become reinitiated back into society and live like a true human being again,” he says.

Turner is now enrolled in college, off the streets and enjoying a brand new life after being chronically homeless for decades.

He is one of several men who participated in the pilot year of the Chronic Homeless Offenders Program, or CHOP, a support and intervention program for chronic homeless petty criminal offenders in Jacksonville and Jacksonville Beach.

“I had given up trying to find a job and I was just really going to jail often…you know in and out for little crimes like trespassing,” Turner remembers. 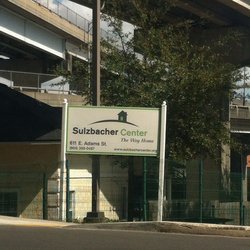 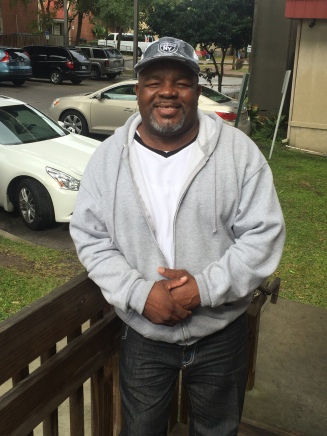 Many homeless people end up charged with minor crimes, like vagrancy. But Instead of jail sentences for misdemeanors, the program offers an alternative: probation along with stable housing, full medical support, peer counseling and case managers to work with them on a weekly basis. The services are all paid for with federal and private grants.

The program is a collaboration between hospitals, the Jacksonville Sheriff’s Office, the state attorney’s office and the nonprofit Sulzbacher Center for homeless services. Their goal is stopping the costly cycling of people between the streets, jails, shelters and emergency rooms.

Sulzbacher Center President Cindy Funkhouser says the collaborative effort is successful because of attention to each person’s unique needs.

“In essence, it is saving the system at large so much money. The hospitals, the jails, the social services agencies…and these people now have the dignity of being housed and getting their life back,” she says.

The year-old program has already drastically reduced arrests and hospital visits among its 25 participants. Some of them used to get arrested dozens of times a year. People like Charles Turner now have income, housing and health care.

The Sulzbacher Center is working on expanding the program, and Funkhouser hopes it becomes a national model for reducing homelessness

Turner smiles after being asked about his dreams for the future. .“My real goals for the future are just to be able to pay for my own rent…have some insurance, buy my own groceries, buy my own clothes, maybe get a car and, good Lord willing maybe even find me a wife,” he says. As he stand outside the center that has given him so much help and hope, he looks upon countless other homeless individuals gathered outside, all waiting for the chance he was given: a way out of the cycle.